Warning: Declaration of Cws_Walker_Nav_Menu::walk($items, $depth) should be compatible with Walker::walk($elements, $max_depth, ...$args) in /home/cannonpa/public_html/wp-content/themes/clinico/functions.php on line 0

Get Social
Connect with us

The History of the Holy City 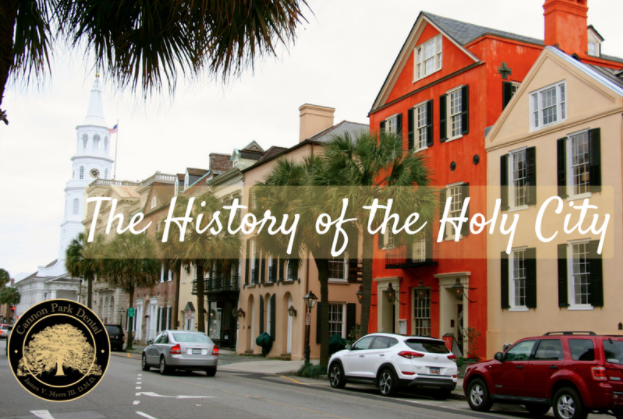 Charleston has been on America’s radar as the country’s top city for a few years running. Our beautiful city is packed full of both historic charm and contemporary attractions. This month, we want to share with you a little more about our city and its history.

Common nicknames for Charleston include “Chucktown” and “The Holy City”. When the city was originally established in 1670 by the British, it was named Charles Town to honor King Charles II. “Chuck” is a common nickname for Charles, and thus “Chucktown” was born.

Another nickname for our historic port town is “The Holy City,” referring to the many church steeples you can see lining the city’s skyline. At one time, Charleston held the title for the most churches per capita! Many other cities now compete for this title, but the nickname still sticks.

Like the steeples, much of the city’s history is still visible today. Hints toward the past are around every corner and every block. There are historic seals on dozens of building and plaques that give you insight into our history. A good way to start your Charleston exploration is to start at the beginning.

Charleston was founded in 1670 by English Colonists. When the English were sailing along the coast they noticed thousands of white oyster shells near the point of the peninsula. They named this area “White Point” and later on a park was established as “White Point Garden”. In recent times, you know this historic site as The Battery.

Walking North along the seawall from The Battery, you can see one of Charleston’s most photographed places: Rainbow Row. This series of colorful, historic homes are a nod to our city’s early beginnings as a thriving seaport.The houses were painted in bright colors so drunken sailors could find their homes when stumbling back from the pubs at the end of the night.

The history of Charleston is some of the oldest and most diverse in the United States. There are dozens of places to visit to see the history of the city. Walking, boating, bus and carriage ride tours are all popular and fun ways to experience Charleston.

Through all the change over the years, Charleston has kept its charm and beauty, making it one of America’s most beautiful historic cities. The team at Cannon Park is happy to call this sea coast town home and to have our office so close to our nation’s history.

Our Cannon Park team hopes you enjoy exploring Charleston as much as we do! If you’re anywhere near Ashley Avenue during your exploring, stop in and see us at Cannon Park. Need an appointment? Call us at (843) 723-5346 or visit us online.